The Hobbit, the battle of the five armies : chronicles : the art of war / foreword by Lee Pace ; afterward by Richard Armitage ; introduction by Terry Notary ; written by Daniel Falconer. 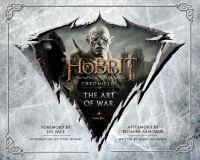 View other formats and editions

View all formats and editions (2)

Search for related items by subject

The Hobbit: the Art of War : The Battle of the Five Armies: Chronicles
by Weta
Rate this title:
vote data
Click an element below to view details:

The Hobbit: the Art of War : The Battle of the Five Armies: Chronicles


Presented by Academy Award-winning director Sir Peter Jackson, the ultimate insider's look at the conflicts and battles waged in The Hobbit movie trilogy: how they were devised, composed, designed, staged and more. Smaug's fiery attack on Lake-town, the White Council's raid of Dol Guldur, the ferocious Battle of the Five Armies itself--all of the conflicts waged in The Hobbit motion picture trilogy are examined in exquisite detail from the first skirmish to the ultimate conflagration in the trilogy's dramatic conclusion. The Hobbit: The Art of War brings together all of the special effects imagery in the Weta archives and unprecedented access to Sir Peter Jackson--the genius behind some of the world's biggest motion-picture franchises, The Lord of the Rings and The Hobbit--who shares his expertise and encyclopedic knowledge with fans as never before. The Hobbit: The Art of War takes fans inside this creative visionary's mind and gives them an understanding of how he plotted each and every movement captured on film. Jackson offers in-depth discussions of the strategies of each army, the tactics they employed, and the significance of each collision between rival cultures. The cast members from the three films also share personal stories of how their characters' tales are resolved. Meet the armies of digitally generated creatures these heroes must overcome, delve into the world of Weta Digital and the Motion Capture Studio. Discover how the largely digital battles were achieved, from the design and creation of the battles' creatures and the fight choreography, to the extended environments and visual effects necessary to make Tolkien's world vividly real. The Hobbit: The Art of War is packed with lavish galleries showcasing the costumes, armor, weapons, and props integral to the battles, as well as the stories behind their creation. With never-before-heard behind-the-scenes, on-the-set, and in-the-studio stories, and exclusive detailed content, The Hobbit: The Art of War is the ultimate Hobbit fan's encyclopedia and a must have for all aficionados of the craft of filmmaking.
► Shelf Browser
► MARC Record